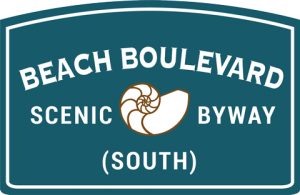 This section of the Beach Boulevard byway features a picturesque drive through the quaint communities of Bay St. Louis, Waveland and Clermont Harbor. It runs along the scenic sand beach and includes a three-mile walking and biking trail of downtown areas, historic and artistic amenities, restaurants, casinos and unique stores. 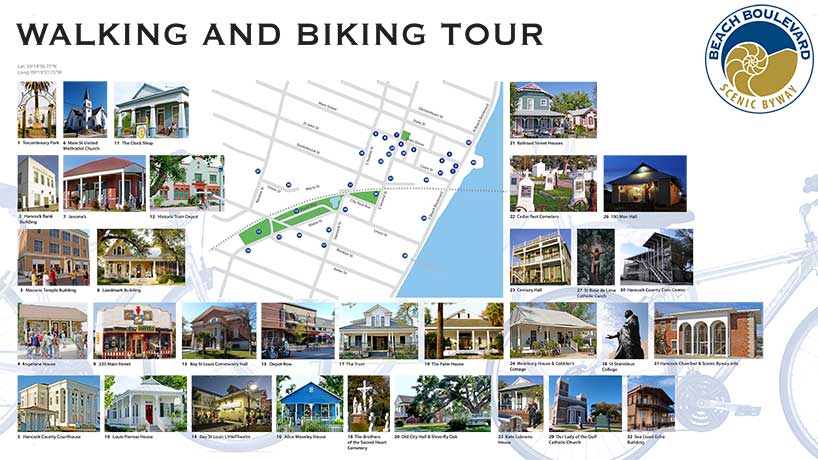 Here are some of the featured sites along the southern section of the Beach Boulevard byway. 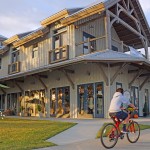 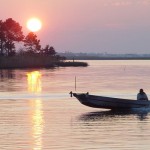 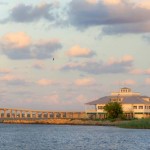 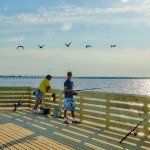 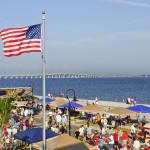 On the south side of the U.S. Highway 90 bridge, visitors can take advantage of a unique recreational opportunity – a pedestrian and biking path that crosses the Bay of St. Louis. It is an important link of the 100-mile Mississippi Heritage Bike and Pedestrian Trail as it crosses the water east toward Harrison and Jackson counties.  After Hurricane Katrina destroyed the bridge in 2005, rebuilding was one of the first priorities in the recovery process, and the pedestrian and biking trail was added to the south side. Using some of the metal from the destroyed bridge, local artists designed creative metal castings that line this one-of-a-kind path, which also is a namesake for a signature event each year called the Bay BridgeFest held  in Old Town Bay St. Louis.

Since there wasn’t a good way to travel along the Gulf Coast in the early 1900s, a project began to develop the Old Spanish Trail that would stretch from San Diego, California, to St. Augustine, Florida. The car trail in this area eventually became known as Highway 90, but one part of the highway construction veered off the original route and formed this section on the byway map.

Along the historic Old Spanish Trail and present day Ulman Avenue, visitors will see the Ave’ Maria Grotto and the St. Augustine Seminary. For many years, the seminary trained African American men for the priesthood. Students and patrons of the small chapel on the seminary grounds built the grotto for a place of meditation.

At the corner of Ulman Avenue and Dunbar Avenue (where the historic trail takes a southerly turn), visitors will find McDonald Park, which boasts a splash pad, playground, and restrooms, with more development to come. 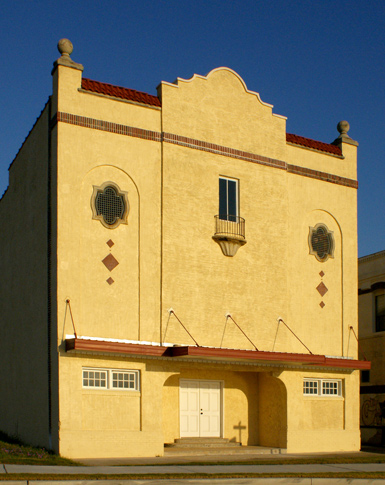 The waterfront community of “Old Town” is known throughout the South for its eclectic art colony, historic district, restaurants, shops, cafes, stately houses and charming cottages. Bay St. Louis was chosen in 2010 as one of Coastal Living magazine’s top ten beach communities in the country. The most recent accolade bestowed to the historic city is its ranking as one of Budget Travel’s “coolest” towns.

Old meets new in downtown delighting visitors and residents alike. A new seawall features ample green space to enjoy sunsets atop the bluff at the water’s edge, and a new pedestrian and biking pathway has been added. The James Rutherford Pier and a new Bay St. Louis Municipal Harbor are are now open, completing post Katrina waterfront improvements in “Old Town.”

At the corner of Main Street is the Historic Hancock County Bank. As the oldest existing Hancock branch, it still serves as a small downtown bank with a very ornate interior and is home to a variety of banking artifacts. The building also served as a location of the Customs Office for the area.

Just off the scenic byway on Main Street and Court Street are exceptional specialty shops, art galleries, antique treasures, and exquisite restaurants, many of which are in original architecture buildings that were restored following Hurricane Katrina. It’s also home to a handful of historic sites such as the stately courthouse, which has been newly remodeled, yet preserved in certain sections to showcase original craftsmanship.

This location also is a celebration center for many events in downtown Bay St. Louis like BridgeFest and Cruisin’ the Coast. The area is closed to all traffic except for Cruisin’ the Coast traffic, a weeklong October event where vintage cars line Beach Boulevard, Main Street and Second Street. 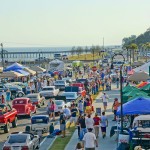 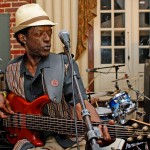 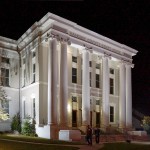 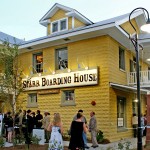 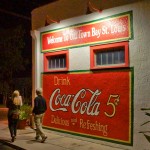 The Depot District of Old Town Bay St. Louis offers a historic glimpse of a time when train transportation was a major link to the New Orleans area for many Bay St. Louis residents. It was common back then for horse-drawn carriages to bring commuters to the train station to travel into New Orleans for work and to be picked up by those same carriages at the end of a long day. The two-story mission style building was constructed in 1928. The Depot is surrounded by park-like grounds and is home to the Hancock County Tourism Bureau and Visitor Center. 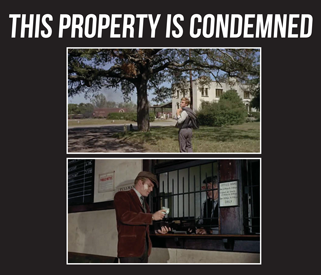 The area showcases several unique shops and restaurants, a community center, and a Little Theater. The Bay St. Louis Little Theater is located in a former general store that was portrayed as the Starr Boarding House in the movie This Property is Condemned, starring Natalie Wood, Robert Redford, Charles Bronson, John Provost (who played Timmy on the television series Lassie) and Mary Badham (who starred with Gregory Peck in To Kill a Mockingbird). Look for markers of the various scenes from the movie throughout the area and also relive the times when rail transportation was king.

Religion has played a rich history in Hancock County and can be seen in wonderful historic examples throughout the region.

Our Lady of the Gulf Catholic Church, originally built in 1847 but burned in a fire in 1907, illustrates the importance of the Catholic church within the community. The present building was rebuilt in 1908 and features stained glass windows handmade in Munich, Germany.

The historic St. Stanislaus College is located next to the church, which was established in 1854 by the Brothers of the Sacred Heart. The school is a college preparatory school that offers boarding, and since its founding, has hosted both international students and students from across the country. Part of the original school still exists, but portions of the school were lost to fire and hurricane damage during its nearly 160 years of existence.

Founded in 1926, St. Rose de Lima Catholic Church is one of the most vibrant and integrated churches in South Mississippi. The St. Rose Choir is nationally known and two CDs are credited to their name and one to the men’s choir. “Christ in the Oaks”, the mural across the sanctuary creates a sense of awe and majesty to all who enter.

This area features two boat launches, a public pier, pavilion, parking area, bathrooms, beach access, and the Heritage Biking and Pedestrian Trail that links recreational resources, as well as scenic and historic resources along the Beach Boulevard Scenic Byway. The Heritage Trail is almost always in use and offers a picturesque place for recreational activities. The waterfront is available for walking, running, swimming, sailing and boating. 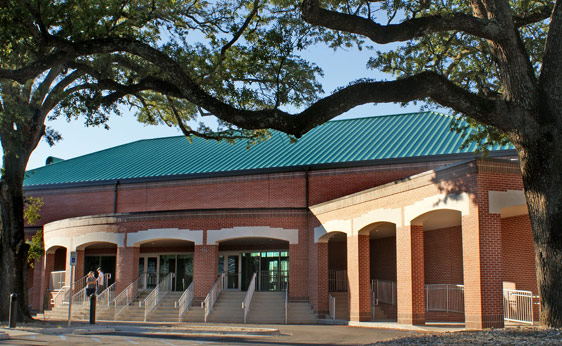 If you are looking for a perfect birding spot along the Beach Boulevard Byway, just follow the signs between the Washington Street Pier in Bay St. Louis and the Garfield Ladner Pier in Waveland. Known as Sweetbay Hollow, it boasts a birding tower that was constructed by volunteers on a tract of land owned by the Land Trust for the Mississippi Coastal Plain. From this tower, various species of birds can be viewed in the surrounding wooded area and the nearby beach.

As you make your way down the Beach Boulevard Byway to the town of Waveland, you’ll find the Garfield Ladner Pier area. Recreational opportunities abound for residents and visitors, as well as scenic views of the Mississippi Sound. The pier is one of several areas that serve as a connecting point for beach activity, and has covered seating, lights and fish cleaning areas.

Just off the Beach Boulevard Scenic Byway is Coleman Avenue, which boasts a new City Hall, a retail business complex, restaurants, a new library, and the Waveland Civic Center.

One of the city’s more popular landmarks is the Blue Star and Veterans Memorial, which was established in 2002 to honor veterans and their sacrifice, and has designated areas for meditation and reflection.

The big waves are back at Buccaneer State Park, the popular, 400-acre green spot that borders the Gulf of Mexico in Waveland. The popular park is an ideal “mini-vacation” for residents and visitors alike. They can start their days at the water park end each day around a campfire.

This natural treasure offers more than 200 premium campsites with full amenities, a disk golf course and the Pirate’s Alley Nature Trail. The park’s half-million gallon wave pool pulses in eight different patterns during different times of the day, making for a varied guest experience. The park also features two water slides and a separate facility for toddlers and younger children.

In addition, Buccaneer State Park features numerous historic landmarks. Long before it became a recreational haven on the Mississippi Sound, the park was known as Jackson Ridge. Archeological excavations are currently underway to determine the location of Sea Song, the family home of Andrew Jackson’s wife and the home he in lived for several years.

Historically known as Bayou Cadet, it is now commonly referred to as Bayou Caddy. This area thrives on the seafood industry and its workers who harvest the Mississippi Sound, and the culture and lifestyle of this community reflect it.

The Bay of St. Louis provides an excellent shellfish nursery, and each season, shrimp make their way into the open waters of the Mississippi Sound and the Gulf of Mexico. Nearly 80 percent of the oysters harvested in Mississippi take place in Hancock County waters, or waters immediately adjacent to the county. One of the most productive reefs is the Square Handkerchief Reef, which is located offshore, and boats can be seen harvesting seafood in this area from nearly anywhere along South Beach Boulevard. 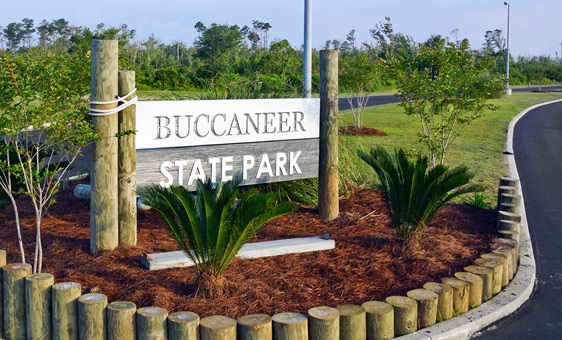 Located between Buccaneer State Park and the scenic community of Clermont Harbor, this harbor and pier area offers breathtaking views of the Gulf and some of the best fishing and crabbing opportunities along the Beach Boulevard Byway.

An official site on the Mississippi Gulf Coast Birding Trail, visitors can view an extensive tidal wetland, along with the near shore birds that use this area for their habitat. The marshes change with the seasons, as do the birds that migrate to the area.

The area showcases a nod to Hancock County history. It was the site of the historic Grand Hotel and a fleet of stately boats and fishing cabins. Today, the area has been transformed into a vast wetland area that provides a habitat for birds and is a nursery for fish and other seafood.