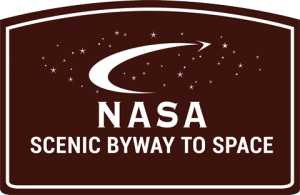 Welcome to the Byways to Space network – the only one of its kind in the country. This scenic byway includes six routes that cover more than 30 miles through or near the NASA Stennis Space Center’s (SSC) 125,000-acre buffer zone. Often canopied by oaks, the roads and trails meander through the scenic countryside, passing former historic settlement sites, scenic vistas, natural waterways, and parks perfect for hikers, bicyclists, birders, kayakers, and nature lovers.

The NASA Scenic Byway to Space is the beginning point of the journey, which encompasses more than 30 miles of land inside the Buffer Zone surrounding John C. Stennis Space Center. To get to the INFINITY Science Center, one of Mississippi’s newest Tier I attractions, take Exit 2 off of Interstate 10 and proceed south on Highway 607 to the entrance of the Mississippi Welcome Center. After turning into the Welcome Center entrance, take the first left.

For a nominal fee, visitors can learn about early explorers, rocket testing, living in space, and see some great exhibits that feature astronaut suits and a training module for the International Space Station. Other options include eating at the INFINITY Café, shopping in the INFINITY gift shop, and touring the John C. Stennis Space Center.

At the northern end of the NASA Byway to Space, a historical marker commemorates 50 years of rocket testing at John C. Stennis Space Center, which is the nation’s largest rocket engine test facility. It also is the home of several government agencies and private companies that are in the aerospace business or in support of government missions in environmental monitoring, oceanography, and data management.

To make the Stennis mission possible, the federal government also purchased a restrictive easement over 125,000 acres of land that surrounds the center, and is commonly referred to as the Buffer Zone. The existence of the Buffer Zone has been recognized by NASA as a national asset that is protected for the viability of the nation’s space program. Due to the natural beauty and environmental uniqueness of the land in the designated area, additional land was purchased by the State of Louisiana for a Wildlife Management Area, and by the State of Mississippi as part of the Mississippi Coastal Preserves.